During the time of the 5th Earl Spencer it was noted that:

"Not only the aristocracy but also the Royal family were often received at Spencer House. The Prince of Wales was a particularly frequent visitor… he was more or less forbidden by the Queen from accepting party invitations to anywhere except Spencer House."

Spencer House was conceived as a showcase of classical design but it was also designed for pleasure and a festive note runs through the decoration of the rooms which, from the late 1760s, were extensively used for entertaining guests and for gatherings of close family and friends. 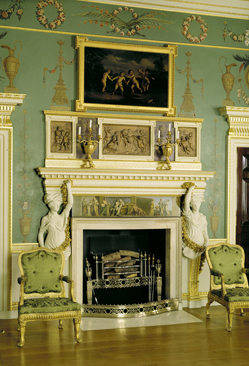 The first Earl Spencer and his wife were prominent figures in London society and during their lifetime Spencer House was the suitably splendid setting used for lavish entertaining. An active social life was expected of a senior member of the aristocracy and Earl Spencer was a generous host to his many guests.

Known to everyone in fashionable eighteenth-century society including royalty, aristocracy, artists, poets, writers and politicians, the Spencers hosted lunch parties, receptions, banquets, concerts and masks on a grand scale when in residence during the Season.

This tradition was continued by their descendants, notably the fourth and sixth Earls, both of whom served as Lord Chamberlain of the Royal Household.

The fourth Earl regarded it was his duty, as a senior nobleman, to entertain in grand style for almost the whole of court society and, in July 1857, Queen Victoria came to Spencer House for a ball held in her honour. As reported in the Morning Post at the time:

“The Queen honoured the Earl and Countess Spencer with her presence at a ball given in honour of Her Majesty, at Spencer House last evening.

The Queen was received in the Entrance Hall by the Earl and Countess Spencer, whom Her Majesty graciously saluted.”

This ball was heralded as “…a magnificent fete, marked by princely liberality and good taste”.

The fifth Earl Spencer and his wife, Charlotte, carried on the tradition of grand entertaining during their residency. Spencer House continued to play a vital role in political, social and artistic life in the capital, a dinner invitation being especially prized. Among the recipients of Lord Spencer’s hospitality was the young Duke of York, later George V, who dined at the House in February 1893.